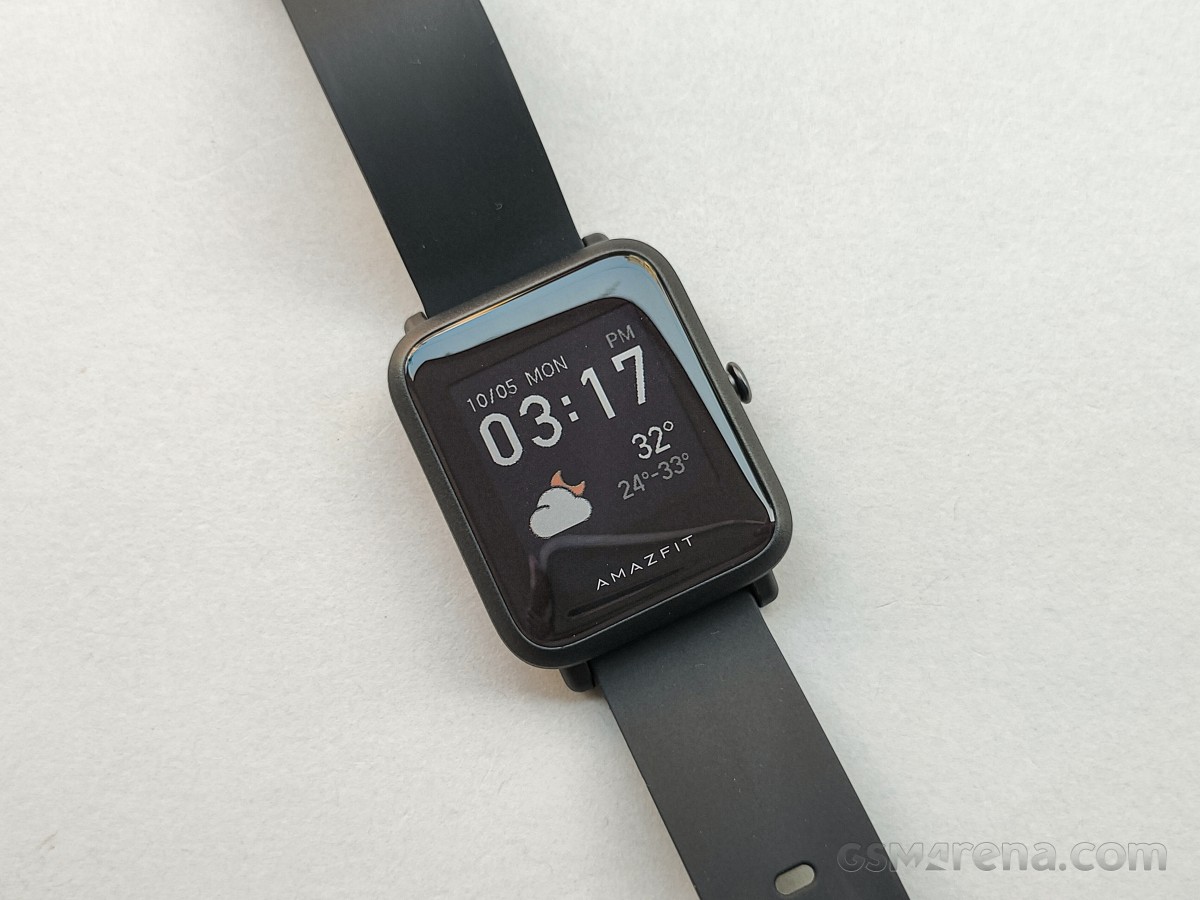 
Huami launched the original Amazfit Bip a couple of years ago and it immediately got a somewhat large and loyal following with its spectacular battery life. It’s no surprise then that the company followed it up with the Bip S this year that we already reviewed and now yet another version.

A toned-down model of the Bip S, dubbed Amazfit Bip S Lite is with us today and while it misses out on some features of the Bip S it manages to bring down the cost too, so does it offer more bang for your buck? Let’s try to answer that with this review.

The Amazfip Bip S Lite looks identical to the Bip S and one can’t tell them apart at first glance. The Bip S Lite weighs just 30 grams and is very comfortable, which makes it ideal to wear at night and while working out. 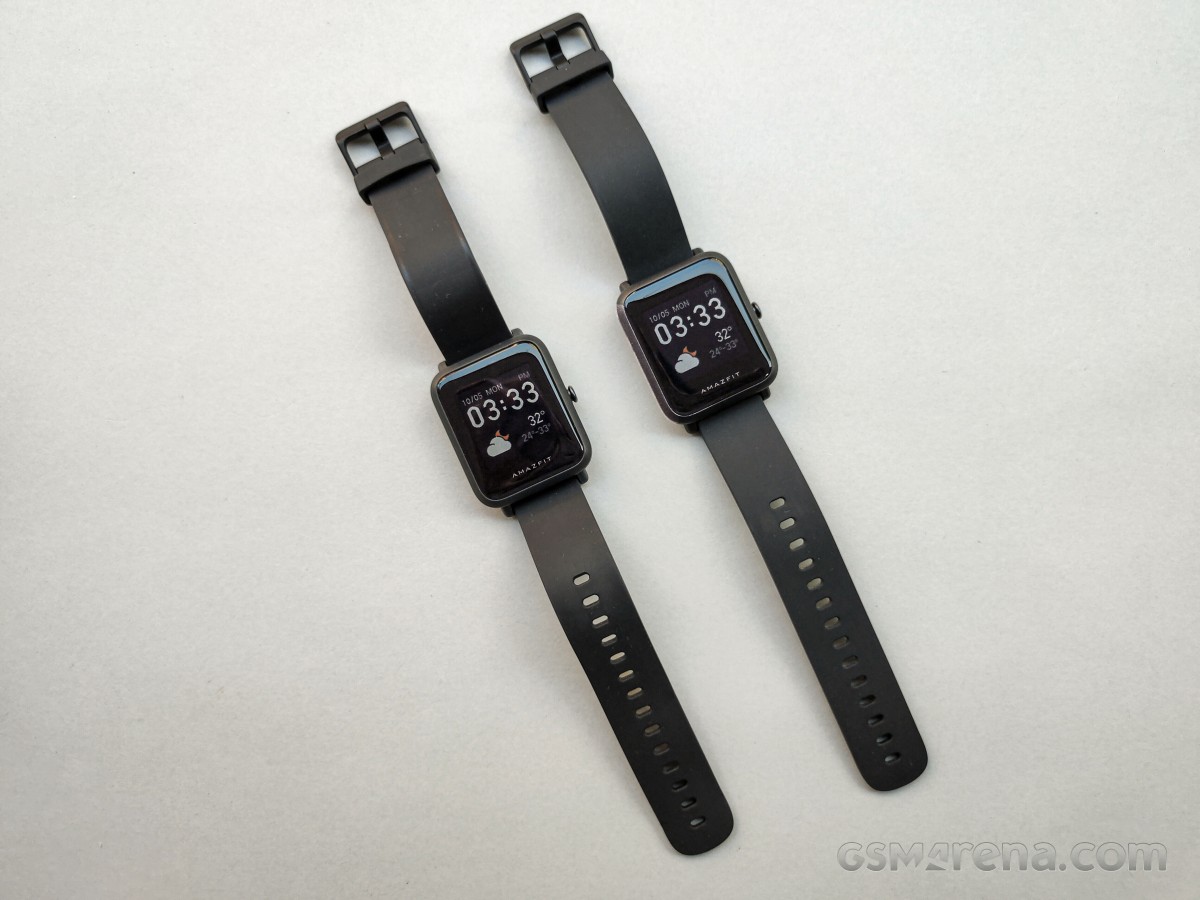 The main module of the Bip S Lite is made of polycarbonate, while the 20mm wide detachable straps have an adjustable length of 85-110mm. These are made of TPU or silicone, depending on what color variant you have. The Oxford Blue and Sakura Pink models come with silicone straps, while our Charcoal Black unit came with TPU straps.

The TPU straps are quite comfortable and I didn’t face any issues with it despite wearing the smartwatch for over 18 hours per day for more than a month. 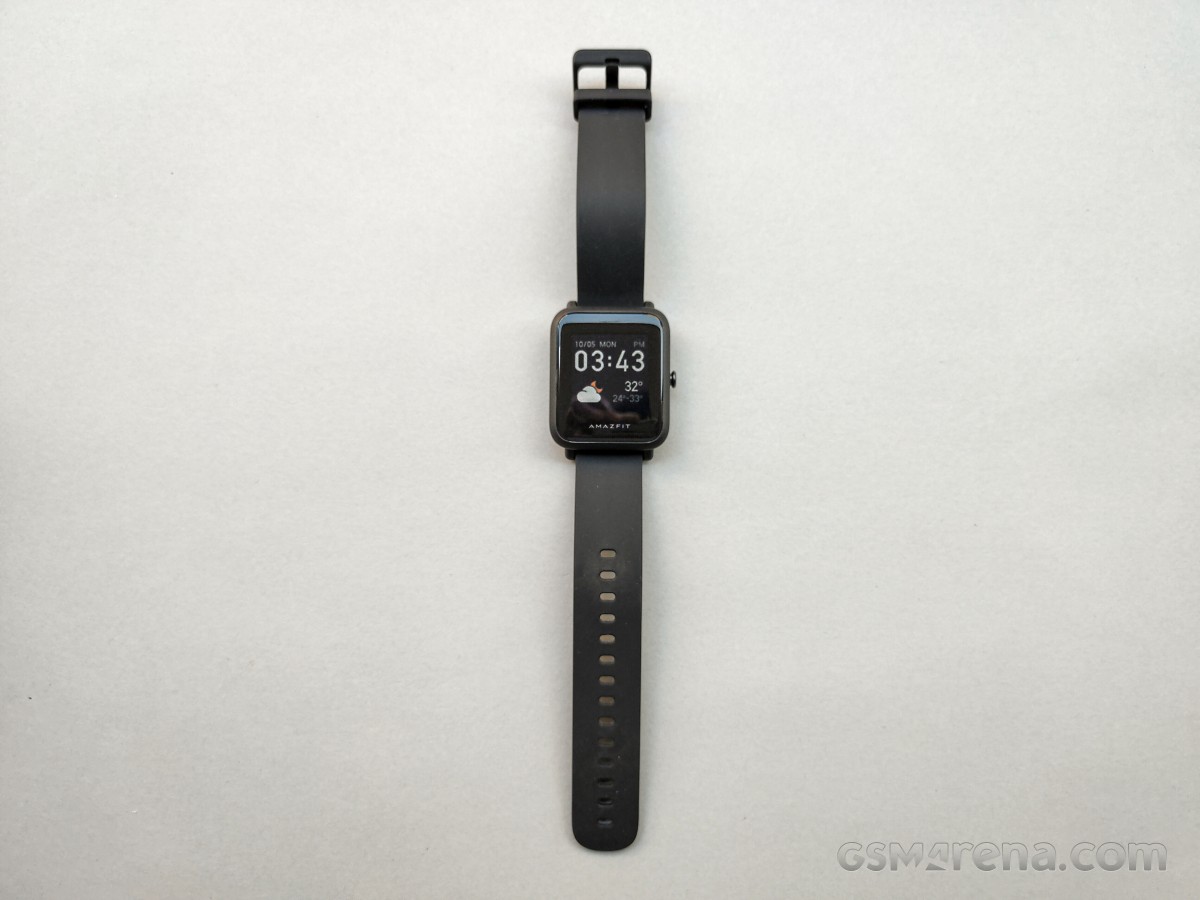 The Amazfit Bip S Lite sports a 1.28″ display that has the Amazfit logo below it, with a 316L stainless steel physical crown located on the right side of the smartwatch. The button has decent feedback and can be used to unlock the smartwatch, return to a previous menu, scroll up and down during a workout, and pause it. You can configure the physical button to quickly start a sports mode with a long press, and it’s also the only way you can access all the features and settings on the Bip S Lite. 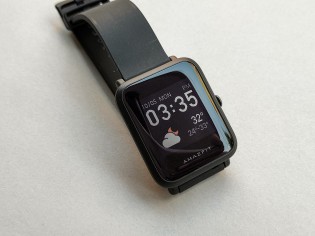 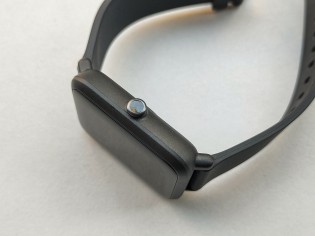 The back of the Amazfit Bip S Lite has charging pins and a PPG Bio-Tracking Optical Heart Rate Sensor, which is housed inside a raised circular dome. The smartwatch is water-resistant up to 50 meters. 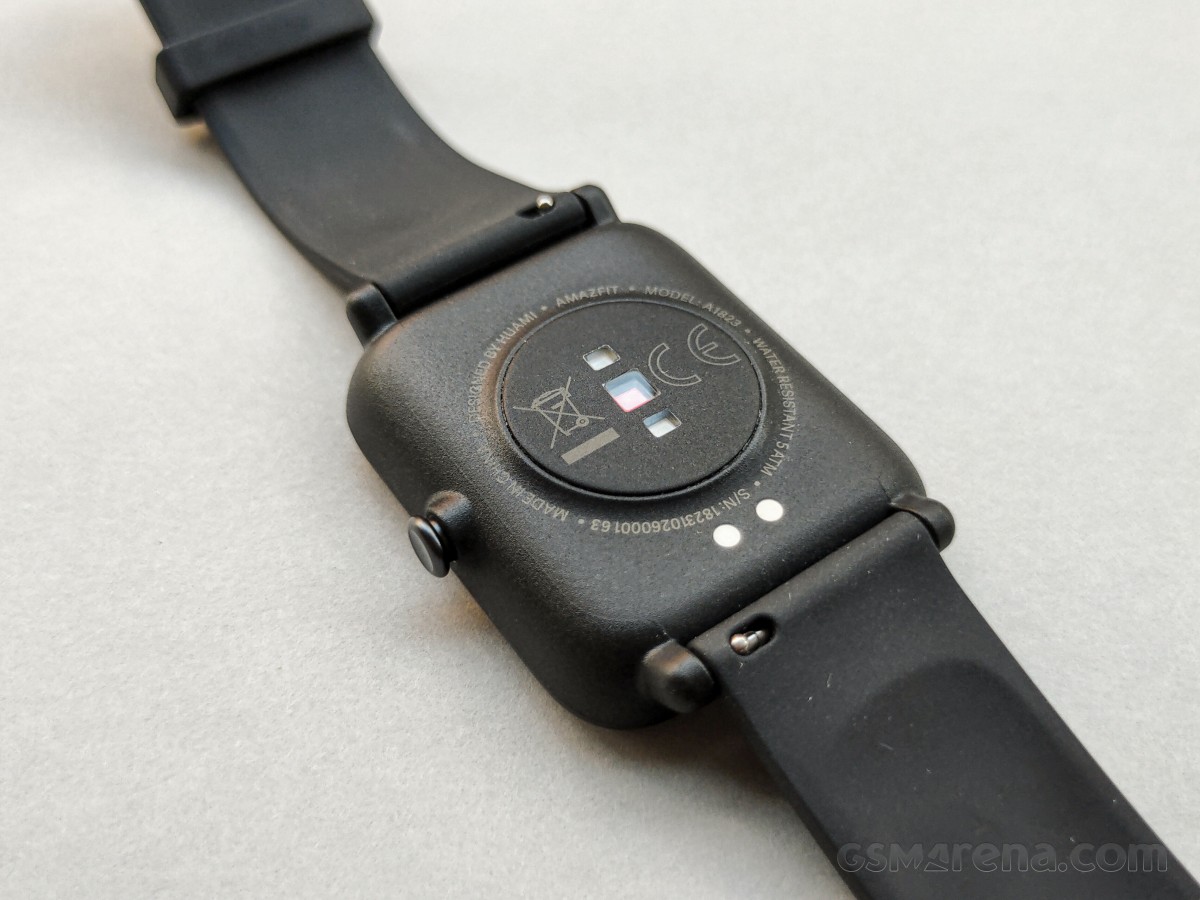 The Amazfit Bip S Lite packs a 1.28″ always-on transflective color display, having a resolution of 176×176 pixels, and the protection of 2.5D Corning Gorilla Glass 3 and an anti-fingerprint coating.

This is the same display that we have on the regular Bip S, and since it’s transflective, it has excellent outdoor visibility – because the brighter the sunlight is, the clearer it looks. This makes the Bip S Lite ideal for those who workout a lot outdoors since they don’t have to turn on the backlight to view the contents on the screen, resulting in power savings.

Indoors you won’t have to turn on the backlight if all you want to do is check the time, but for other purposes, you’ll have to enable it on and may even have to crank up the screen brightness depending on the lighting conditions. 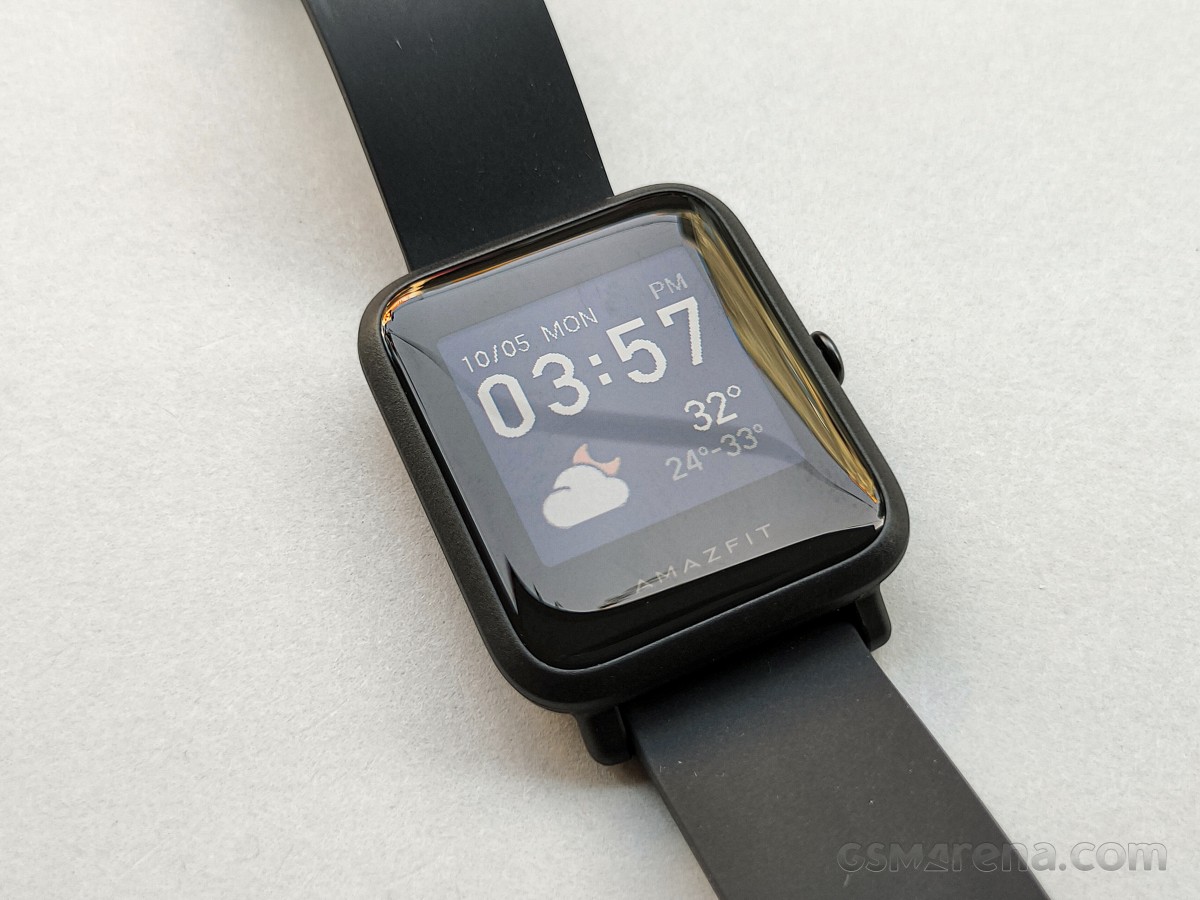 Like the Bip S, the Bip S Lite also comes with a total of five watch faces, with two of them customizable, which allow you to choose what information you want to see on the screen.

If you don’t like the ones that come pre-loaded with the Bip S Lite, you have the option to download the custom watchfaces from the Amazfit app, which is now called Zepp.

Amazfit promises a total of 150 custom watch faces, but at the time of writing this, only 100 are available (on Android). And do note that using a custom watchface reduces the battery life.

Other than displaying the time, date, day and weather, the Bip S Lite also displays app notifications and alerts you of incoming calls. The smartwatch comes with a Lift wrist to view info feature that allows you to turn on the backlight of the screen by lifting your wrist. You can have this feature turn on/off automatically at a given time daily or keep it enabled around the clock.

The Amazfit Bip S Lite is compatible with both Android and iOS devices and you need to download the Zepp app from their respective app stores to set up the smartwatch and tinker with its settings. Below are the screenshots of the Zepp app for Android, which should give you a better idea of the Bip S Lite’s settings.

Despite the rebranding, the app is mostly the same on the inside, and that’s not a good thing. You still have shortcuts for the same functions at multiple locations, and the ones that aren’t supported by the device aren’t hidden but grayed out. This makes the app quite a mess and difficult to use at times. It’s high time Amazfit decluttered its official app to provide a better experience.

That said, the Bip S Lite runs Amazfit OS, which is quite responsive and comes with a simple UI. It works the same way it did on Bip S – swiping up on the homescreen lets you access the notifications and a swipe down opens the Control Center, which provides quick access to Do Not Disturb, Screen Lock, Music Control and Screen Brightness.

A swipe on the left or right on the homescreen lets you access different functions, which include Music, Status, PAI, Heart rate and Weather. The order of appearance of these shortcuts can be rearranged by heading to the Zepp app’s Profile tab, tapping on Amazfit Bip S Lite under My devices, and then tapping on Shortcut settings.

Like on the Bip S, on the Bip S Lite you rely on the physical circular button to start a workout, access other features and settings of the smartwatch, or exit the menus. However, you can also leave the menus on the smartwatch with a right swipe.

For heart rate monitoring, the Amazfit Bip S Lite uses a PPG Bio-Tracking Optical Sensor, which is the same that’s used on the Bip S. 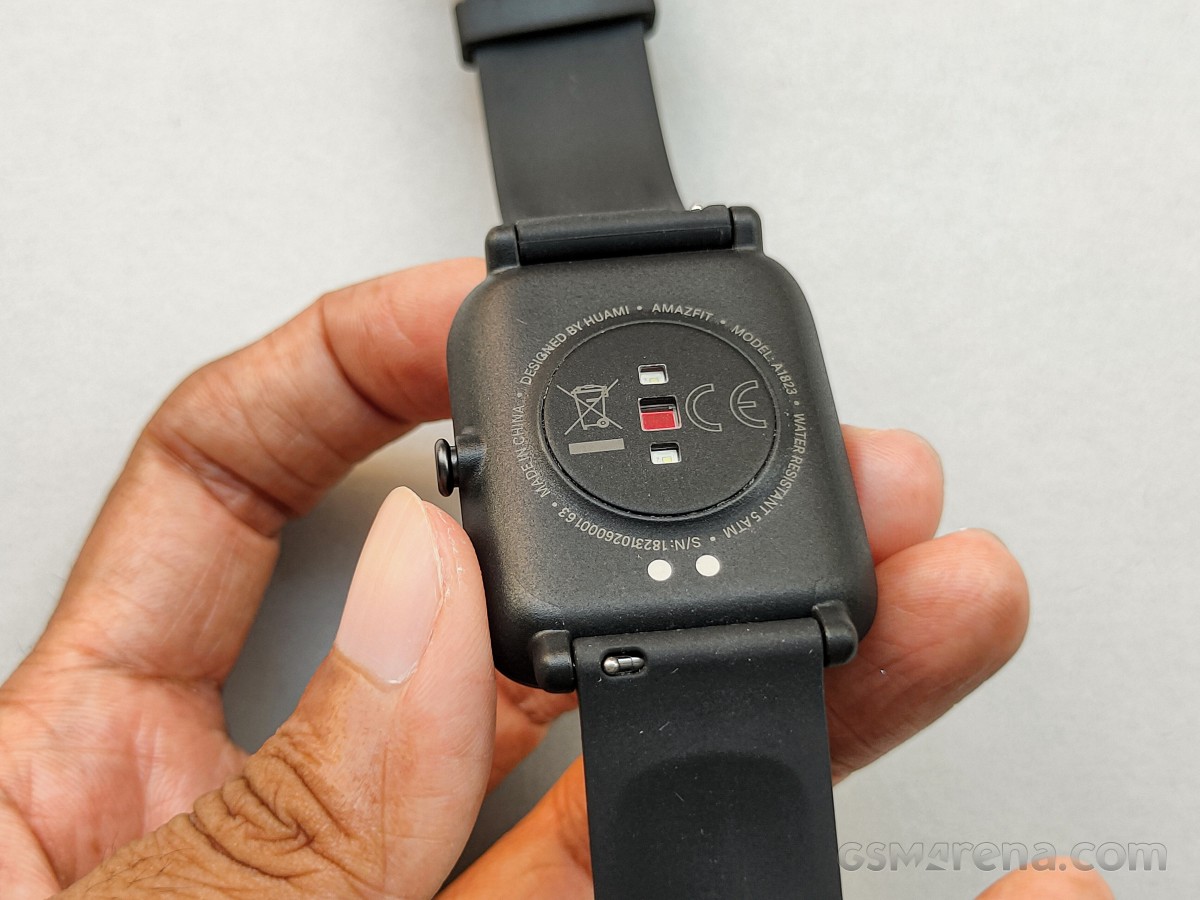 The heart rate can be measured manually on the Bip S Lite, but you also have the option to have it measured automatically at an interval of 1 minute, 5 minutes, 10 minutes, or 30 minutes. However, it’s best not used as a basis for diagnosis and treatment.

That said, if you want to be alerted when your heart rate goes beyond a threshold, you can head over to the Workout > Settings menu on the Bip S Lite and select a value, or do it from the Zepp app, which is also where you will find more details about your heart rate in addition to the Bip S Lite.

Sleep tracking on the Amazfit Bip S Lite is mostly accurate and it’s broken into three phases – Deep sleep, Light sleep, and Awake. All the data is presented in a graphical form in the Zepp app, and you also get a sleep score and a few suggestions from Amazfit’s sleep assistant to improve the quality of your sleep.

Next up is sports tracking. The Amazfit Bip S Lite comes with 14 sports modes, which include Outdoor Running, Treadmill, Cycling, Indoor Cycling, Freestyle, Walking, Elliptical Trainer, Yoga, Jump Rope, Badminton, Ping-Pong, Cricket, Basketball, and Rowing Machine. But despite being water-resistant up to 50 meters, the smartwatch doesn’t track your swimming performance, which is a bummer.

It’s also worth mentioning that unlike the Bip S, the Lite model doesn’t come with an built-in GPS and relies on the GPS of the connected smartphone for workout route tracking. You can see the workout route along with other data of the sports modes by heading to the Exercise record section in the Zepp app. You can also take a quick look at your workouts in the Workout > Workout history menu on the Bip S Lite.

Moving on, we have the automatic step counter – which like the Bip S and many other fitness trackers – isn’t entirely accurate as it did record extra steps. You can see your daily steps on the smartwatch and check your weekly, monthly, and yearly stats on the Zepp app.

The Amazfit Bip S Lite also comes with incoming calls and app notification alerts. The former worked well and lets you mute or reject an incoming call, while the latter worked in the same way as it did on the regular Bip S – not all app icons are displayed on the smartwatch, you can’t delete a new notification when it pops up on the screen, and for bulk deleting you have to scroll down to the bottom in the Notification Center and tap on the delete button.

The Bip S Lite also doesn’t show some special characters in the notifications, including the symbol for the Indian Rupee. But on the upside, you do get app alerts during an ongoing workout and when the smartwatch is charging.

The rest of the features mentioned at the beginning of this section – including Idle Alert – are self-explanatory and worked the same way as they did on the Bip S. However, the weather forecast feature is updated and now shows additional information, including sunrise and sunset times, and humidity. 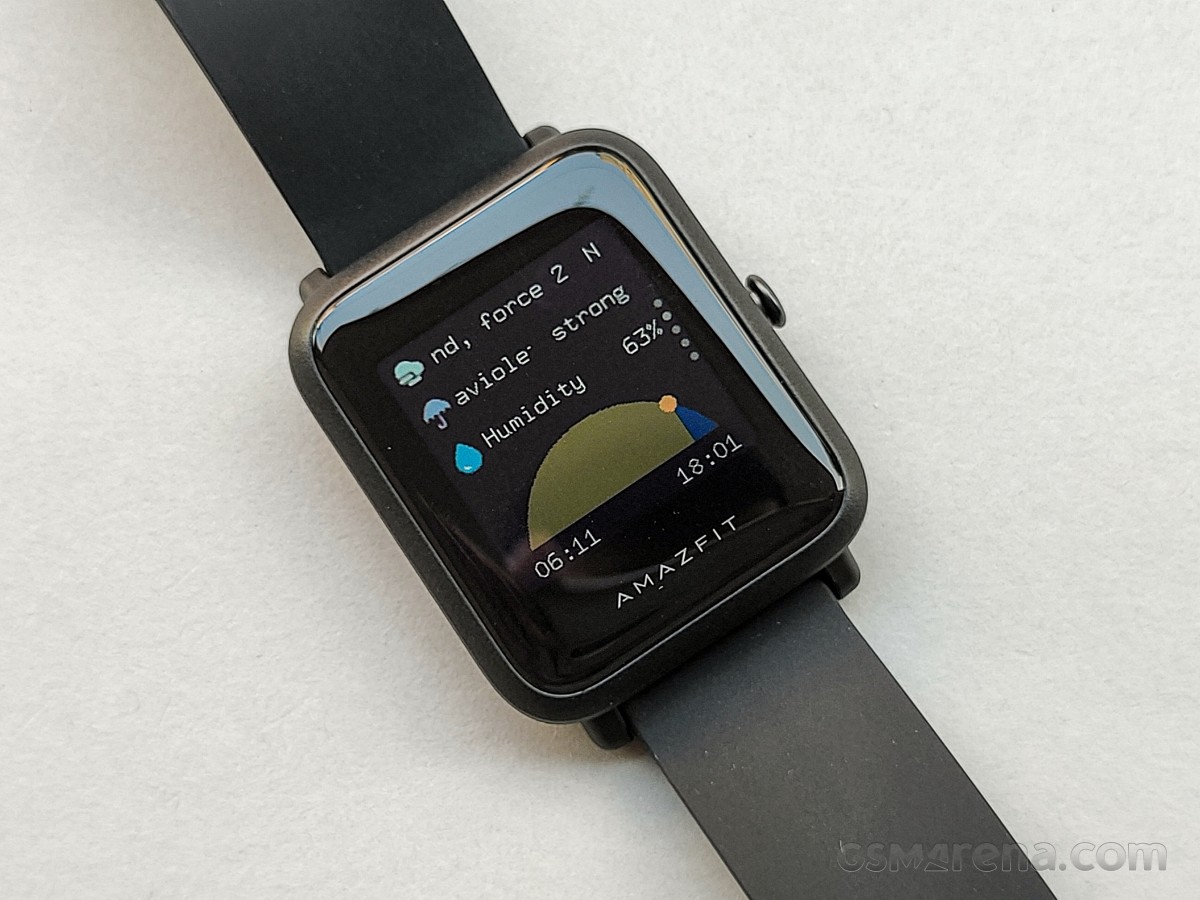 The Amazfit Bip S Lite packs a 200 mAh battery, which is the same size as the cell that ships with the regular Bip S, so most of you may expect it to offer the same endurance as the non-Lite version, which was around 10-11 days in my testing. But that’s not the case.

Amazfit advertised an autonomy of 15 days in a typical usage scenario on the Bip S, while the Lite variant is claimed to last 30 days. During our review period, the Bip S Lite lasted 6-8 days on an average with the default watch face, 100% brightness, automatic heart rate monitoring interval set to one minute, and over 100 notifications throughout the day, which light up the screen and vibrate the smartwatch resulting in additional power consumption. This also includes around 1.5 hours of indoor walking on each charge, but you will likely get different results depending on your usage and smartwatch settings. 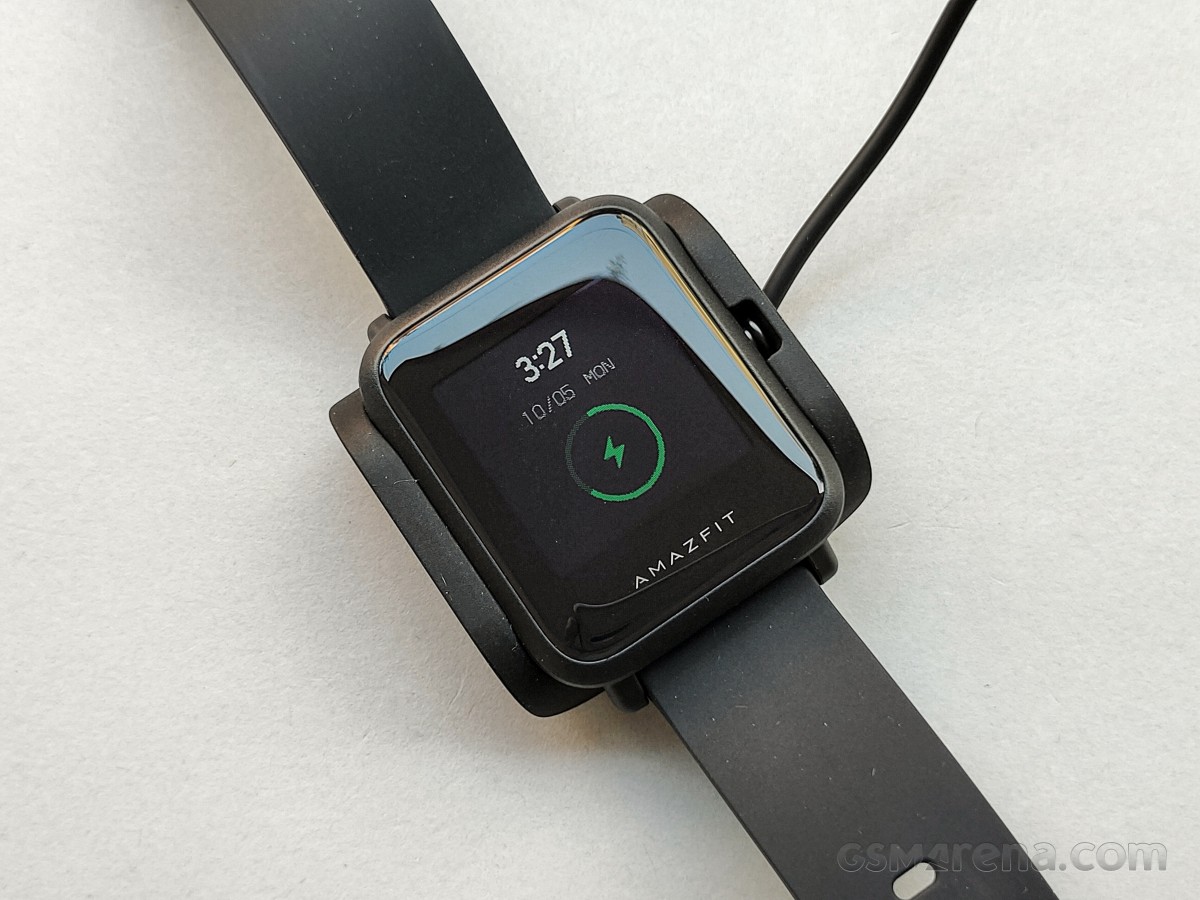 Once you’ve drained the battery on the Bip S Lite, you can juice it up with the bundled charger, which Amazfit says can fully charge the cell in around 2.5 hours. But in our testing, the smartwatch consistently went from flat to 100% in just under two hours.

Like the Bip S, the Bip S Lite also displays the date, day, time and new notifications when charging, but not the exact charge level, which isn’t ideal since you have to turn off the charging and open the Zepp app on the connected smartphone to check the battery percentage. We hope Amazfit fixes this with a future software update.

The Amazfit Bip S Lite is a toned-down Bip S, which skips in-built GPS and swim tracking but retains the transflective display with fantastic outdoor visibility while also being water-resistant up to 50 meters and being good with its fitness features.

We believe it’s smarter to spend the extra money and get the Bip S, but if that’s not possible, then the Bip S Lite is also a nice smartwatch and you can’t go wrong with it. 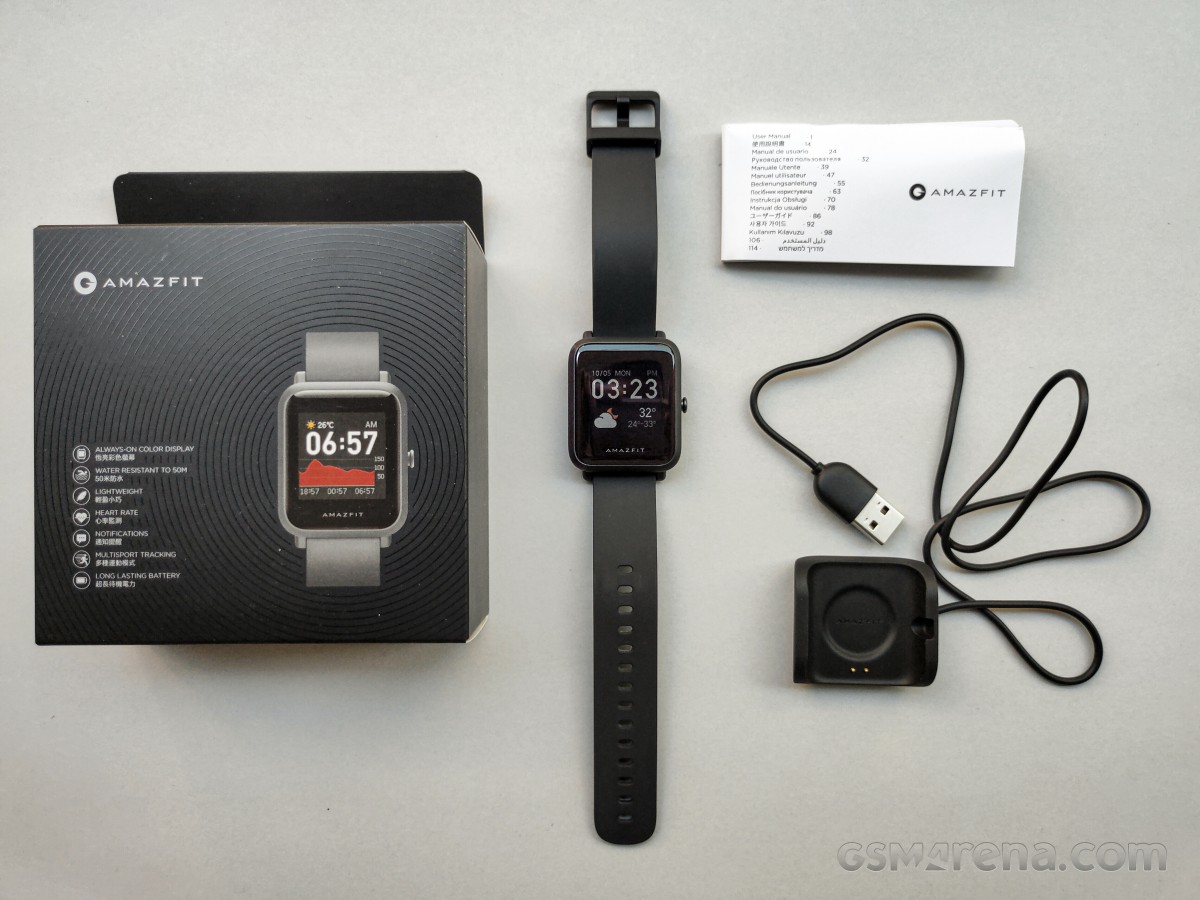 You might also want to consider the Amazfit Bip U, which was recently launched in India for INR3,999 ($55/€45). It lacks the built-in GPS but comes with blood-oxygen level measurement, stress monitoring, menstrual cycle tracker for women, and swim tracking.