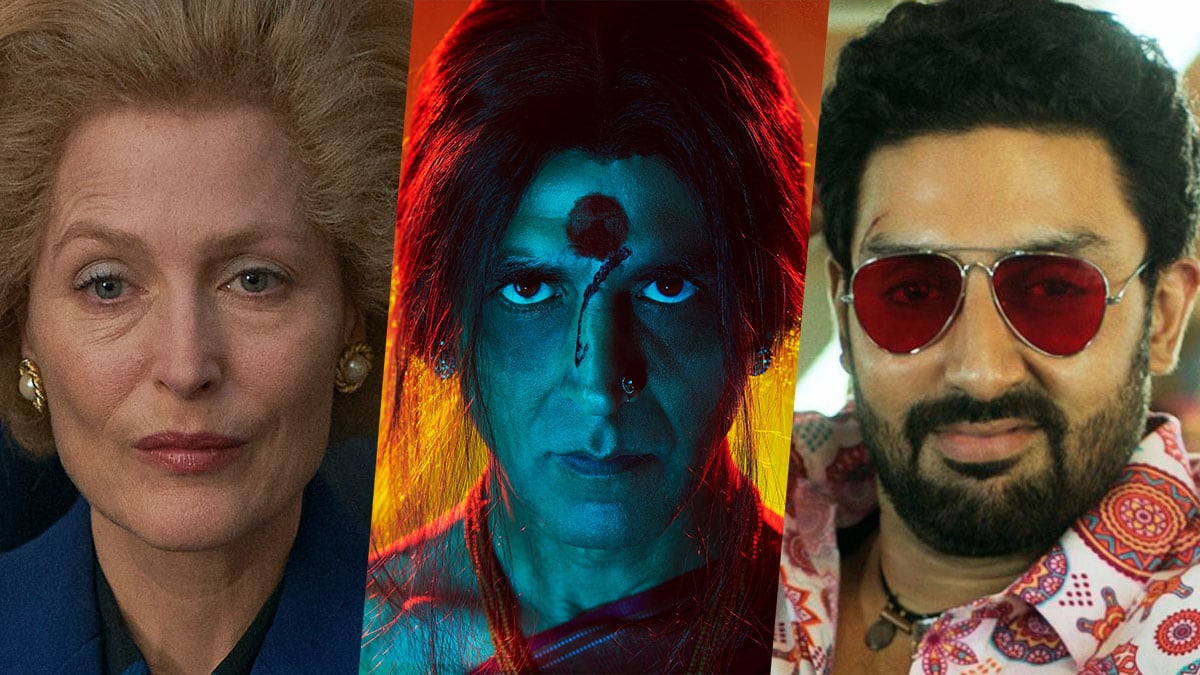 From Laxmmi Bomb to Ludo, What to Watch in November


Diwali is in November and the week leading up to it is packed with new streaming releases from India: Akshay Kumar-led horror comedy Laxmmi Bomb shows up on Disney+ Hotstar first, followed by Anurag Basu helming an ensemble cast in Ludo on Netflix, and the Rajkummar Rao-starrer Chhalaang on Amazon Prime Video. Rao also stars in Ludo, so that’s a very happy Diwali for him. In between and all around, we have the return of the critically-acclaimed The Crown, and HBO’s Game of Thrones for families in His Dark Materials.

Elsewhere, we’ve a new animated entry in the world of Star Wars. Of course, The Mandalorian season 2 will continue all across November, as will Star Trek: Discovery season 3 on Netflix. If you’re looking for even more new arrivals, there are the likes of the Russo brothers, Kate Winslet, Amy Adams, Sophia Loren, Fred Armisen, Kate Mara, and Lena Dunham involved in different properties. With that, here’s our November 2020 guide to Netflix, Disney+ Hotstar, Amazon Prime Video, and Voot Select.

When: November 8
Where: Voot Select

Fred Armisen, John C. Reilly, and Tim Heidecker created, wrote, and lead this comedy about a group of astronauts who train at NASA’s Moon Base Simulator in the desert of Arizona to prepare for their first mission to the lunar surface. Co-creator Jonathan Krisel also writes and directs. All six episodes on release date, with the first episode free to watch.

When: November 9
Where: Disney+ Hotstar

Akshay Kumar is a man possessed in this Hindi-language remake of the 2011 Tamil-language horror comedy Kanchana, starring, written, directed, and produced by Raghava Lawrence. Lawrence is also the director and co-writer on Laxmmi Bomb. The trailer is tonally all over the place, hopefully the film will be better in that regard. Kiara Advani, Ayesha Raza Mishra, Tusshar Kapoor, Sharad Kelkar, Tarun Arora, Ashwini Kalsekar, and Manu Rishi co-star.

When: November 10
Where: Disney+ Hotstar

Girls creator-star Lena Dunham is a director and executive producer on this London-set drama that follows a bunch of recent university graduates competing for jobs at a top investment bank. It’s got new faces behind (creators Mickey Down and Konrad Kay) and in front of (Myha’la Herrold, Marisa Abela, Harry Lawtey, David Jonsson, and Nabhaan Rizwan) the camera, and it’s impossible to say what to expect from the show. Is it Euphoria meets Succession? We’ll find out. New episodes weekly.

When: November 11
Where: Netflix

Ed Helms is an executive producer and will make guest appearances on this Australian comedy led by the comedy group Aunty Donna: Zachary Ruane, Broden Kelly and Mark Bonanno. In keeping with their absurdist humour, the series has a similar tone, featuring low-res people, a cupboard that says “creaky door”, and a thought cloud visible to everyone. Kristen Schaal, and Weird Al-Yankovic will also guest star. All episodes will release together.

When: November 11
Where: Disney+ Hotstar

When: November 12
Where: Netflix

Anurag Basu’s next movie brings together four intersecting stories that involve an amateur kidnapper (Abhishek Bachchan), a hitman (Panjak Tripathi), a waiter (Rajkummar Rao) willing to do anything for his high school sweetheart, a ventriloquist (Aditya Roy Kapur) with a made-up doctoral degree, and two con artists (Fatima Sana Shaikh and Rohit Saraf) who come into a lot of money.

Netflix Will Release 17 Indian Titles in the ‘Coming Months’

When: November 13
Where: Amazon Prime Video

Rajkummar Rao, Nushrat Bharucha, and Mohammed Zeeshan Ayyub are caught in a love triangle in this social comedy from National Award-winning director Hansal Mehta, which spurs a sports competition between two school coaches (Rao and Ayyub) as they vie for the affections of another teacher (Bharucha) and to keep their jobs. Ajay Devgn is among the producers.

When: November 13
Where: Netflix

Screen legend Sophia Loren — she has won awards at the Oscars, Grammys, Cannes, BAFTAs, and Golden Globes — returns to the big screen after a decade to play a Holocaust survivor and a mother to a Senegalese orphan (Ibrahima Gueye). Based on Romain Gary’s 1975 novel The Life Before Us, and directed by Loren’s son Edoardo Ponti.

When: November 15
Where: Netflix

Gillian Anderson (as Margaret Thatcher) and Emma Corrin (as Princess Diana) are the big cast additions for the fourth season of this British royalty drama, which spans 1977 through 1990. Set during the Thatcher era, it introduces Lady Diana, and Princes William and Harry; and it will cover Diana’s wedding to Prince Charles, their Oceanic tour, the Falklands War, and Lord Mountbatten’s funeral. All episodes will release together.

The Crown season 4 will also mark the end of the run for Olivia Colman (as Queen Elizabeth II), Tobias Menzes (as Prince Philip), and Helena Bonham Carter (as Princess Margaret). The Netflix series switches up its main cast every two seasons. Imelda Stanton, Jonathan Pryce, and Elizabeth Debicki have been hired as the Queen, Philip, and Diana for seasons 5 and 6, coming not before 2022.

When: November 17
Where: Disney+ Hotstar

The second book in Philip Pullman’s eponymous trilogy, “The Subtle Knife”, is the basis for the second season of His Dark Materials, as Lyra (Dafne Keen) and Will (Amir Wilson) try to figure out what connects them to the city of Cittàgazze, while staying one step ahead of the adults — Lyra’s mother Marisa Coulter (Ruth Wilson) among them — trying to get their hands on them. New episodes weekly. A third season is already in the works.

Watch the New Trailer for His Dark Materials Season 2, Out in November

When: November 17
Where: Disney+ Hotstar

Disney is willingly reminding everyone of the original infamous terrible, no-good Star Wars Holiday Special by releasing a new animated one featuring Lego versions of your favourite Star Wars characters. Set after the events of The Rise of Skywalker, it reunites Rey, Finn, Poe Dameron, Chewbacca, Rose Tico, and the droids as they head to Chewie’s home planet of Kashyyyk to celebrate Life Day, described as the galaxy’s most cheerful and magical holiday.

When: November 18
Where: Disney+ Hotstar

Big Little Lies creator David E. Kelley is the creator of this procedural thriller about a private detective (Kylie Bunbury) and a former cop (Katheryn Winnick) who discover that a serial killer is behind the kidnapping of two sisters. Based on C.J. Box’s 2013 novel “The Highway”. Ryan Phillippe, John Carroll Lynch, Jade Pettyjohn, Brian Geraghty, and Dedee Pfeiffer co-star. New episodes weekly.

When: November 24
Where: Netflix

Golden Globe-winners Glenn Close and Amy Adams lead the cast of director Ron Howard’s adaptation of J.D. Vance’s 2016 titular memoir, about a former Marine and Yale Law student (Gabriel Basso) who is forced to return home due to a family crisis and has to deal with his addict mother (Adams), while drawing on the memories of his grandma (Close) who raised him. Haley Bennett, Freida Pinto, and Bo Hopkins co-star.

When: November 26
Where: Netflix

Avengers: Endgame directors Anthony and Joe Russo are among the producers on this action thriller set in the titular Iraqi city, which follows a rogue police unit that waged a guerrilla operation against the terrorist group and former quasi-state ISIS, in a bid to push them out of their hometown. World War Z, The Kingdom, and Deepwater Horizon writer Matthew Michael Carnahan makes his directorial debut.

When: November 27
Where: Disney+ Hotstar