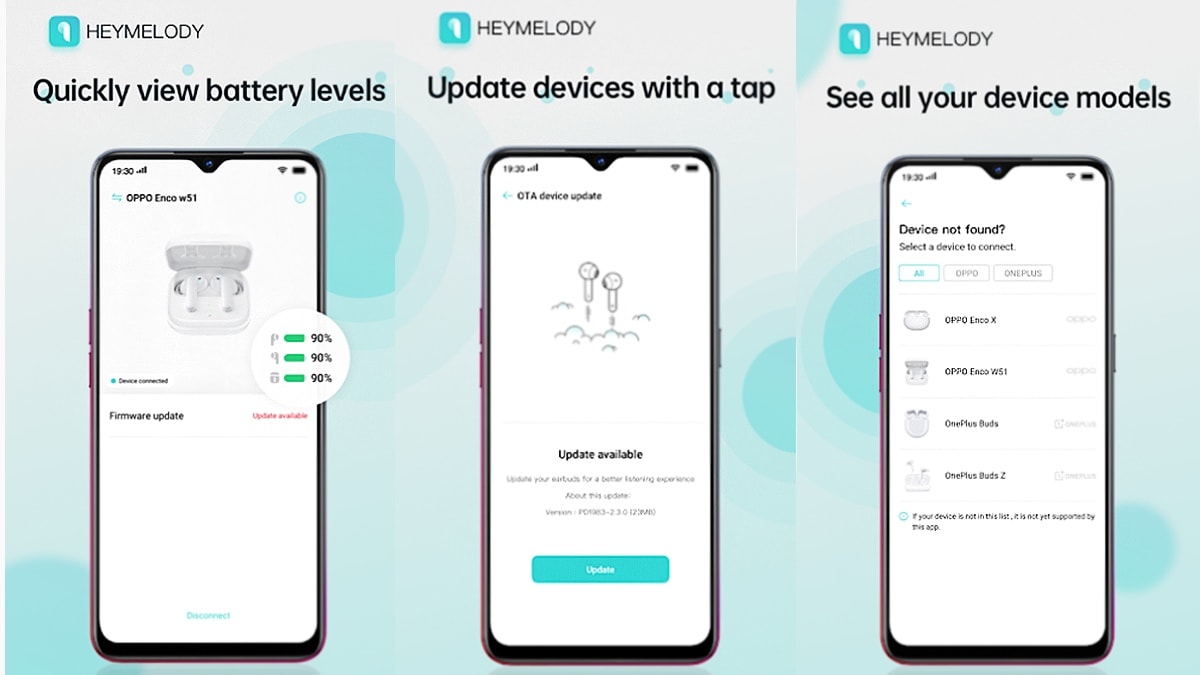 
HeyMelody app’s early access version has been published by OnePlus on Google Play. The app provides OTA update services for OnePlus Buds and OnePlus Buds Z, and even Oppo Enco W51 and Oppo Enco X earbuds. Although this is the primary purpose of the app, it also lets you see battery levels of the left and right earbuds separately, along with their charging case, after pairing the earbuds. As HeyMelody is still in development, it is not available on all compatible devices yet.

While the OnePlus Buds app can also be used to install firmware updates for OnePlus Buds and OnePlus Buds Z, the HeyMelody app provides wider support and extends to Oppo earbuds as well. Users on the OnePlus community forum had first reported having seen the app on Google Play.

Besides that, the app also provides wider compatibility in terms of the phones it works on. While the OnePlus Buds app can only be installed on OnePlus devices that are older than OnePlus 6, HeyMelody app can be used for older OnePlus devices as well as for other Android smartphones. OnePlus had revealed last month that it will be releasing a dedicated app that will let users with non-OnePlus smartphones and older OnePlus devices manage their true wireless stereo (TWS) earphones.

As per a report by XDA, HeyMelody is available to download for older OnePlus models like the OnePlus 3T, as well as phones such as Redmi Note 8 Pro, Xiaomi Mi A3, Realme 7 Pro, and Samsung Galaxy M31s.

On downloading the app, you can select a device to connect from the following four: Oppo Enco X, Oppo Enco W51, OnePlus Buds, and OnePlus Buds Z.

How to use the HeyMelody app

To pair your earphones to the HeyMelody app, you’re required to turn on Bluetooth on your phone. If you’re using TWS earbuds, you have to place them inside the charging case, while if you’re using neckband earbuds you’re required to separate the two earbuds. After that, press and hold your device’s pairing button, after ensuring your earbuds are turned on. The earbuds have to be within 15cm of your phone while using the app.