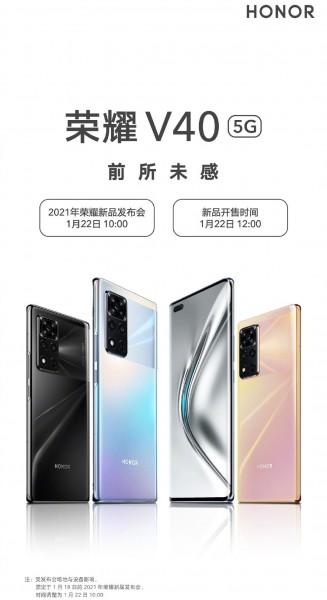 
Last week Honor said it will unveil the V40 5G on January 18 in China, but now the company has announced the phone will be introduced on January 22 instead.

Honor cites conference venue and equipment related issues for the delay, but it has promised to begin the sales of V40 5G on January 22 at noon local time.

The Chinese phone maker hasn’t detailed the specs of the V40 5G yet, however, it shared posters confirming curved screen with a pill-shaped hole for the dual camera and a rectangular camera island on the back.

The Honor V40 5G is said to have a Dimensity 1000+ SoC at the helm and support 66W wired and 55W wireless charging. The smartphone has also appeared in a hands-on video which we’ve attached below.

Previous ArticleWhatsApp moves forwards the date to accept its new terms to May 15
Next ArticleSamsung Galaxy M62 gets FCC certified with 7,000 mAh battery