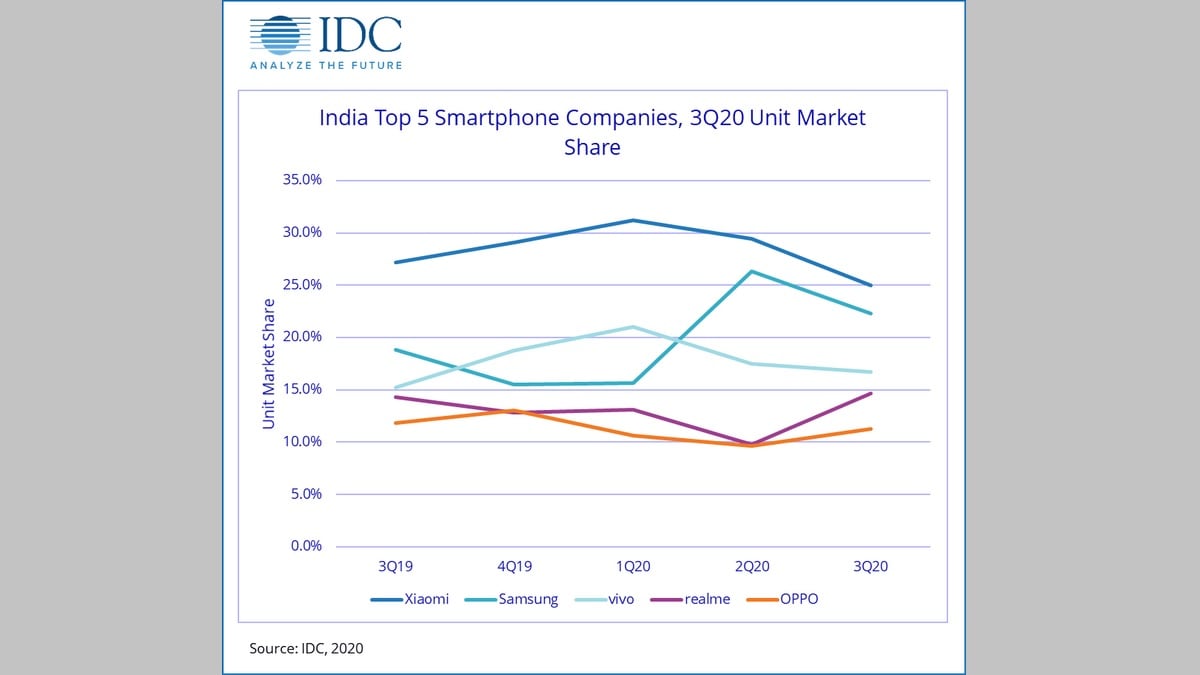 
Indian smartphone market grew 17 percent in the third quarter of 2020 as per data by International Data Corporation (IDC). It shows that there were 54.3 million units shipped during the quarter, which is a 17 percent year-on-year (YoY) growth compared to the third quarter of 2019. It said Xiaomi shipped the most smartphones and experienced a 7.1 percent growth YoY, while Samsung came in second with its much more significant 38.1 percent growth. This growth in the Indian smartphone market was mainly due to fewer restrictions amid the ongoing pandemic and more aggressively priced smartphones.

IDC noted that e-retailers experienced an all-time high with a 24 percent YoY growth, shipping 48 percent of the total 54.3 million units. This was likely because people were not as confident about going to stores in person due to COVID-19. However, offline channels also grew 11 percent YoY as new smartphones faced supply constraints in offline stores. IDC says the growth in online shopping may increase as companies may offer aggressive pricing and offers during the festive season.

IDC states that this growth in smartphones shipped in India is due to the fewer restrictions post lockdowns and the pent-up demand that has been further fueled by aggressive pricing. The various sales and discounts on smartphones, and the ability to maintain social distancing through online stores, have encouraged people to shop online.

In terms of specifications and price trends observed by IDC in Q3 2020, manufacturers introduced a larger number of phones with quad rear cameras with 48-megapixel primary sensors or above, more than 64GB storage options, and larger than 5,000mAh batteries, while reducing the prices. About a million 5G smartphones were shipped in the third quarter. When it comes to pricing, the average selling price (ASP) declined by 2 percent YoY with 84 percent of shipments in the sub $200 (roughly Rs. 14,800) range. This was because smartphones remain the only device for internet access for a lot of households in India, IDC noted.

Interestingly, the premium segment saw a strong growth of 91 percent YoY and Samsung, Apple, and OnePlus were the top manufacturers. Further, there were 25 million feature phones shipped in Q3 2020 which was a decline of 30 percent YoY.