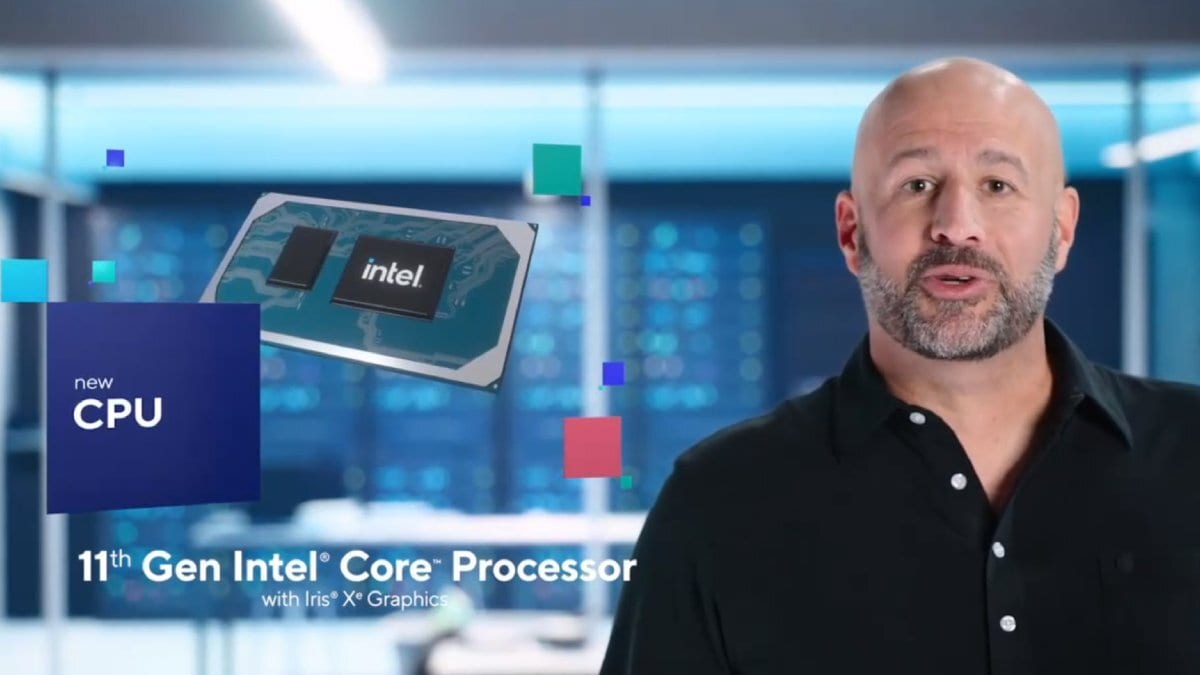 
After disclosing high-level details of its new Tiger Lake CPU architecture, based on the ‘Willow Cove’ core design and new Xe-LP integrated graphics last month, Intel has now officially taken the wraps off the actual chips in its 11th Gen Core lineup. There are 9 CPUs in total, across the Core i3, Core i5, and Core i7 families, and all are aimed at thin and light laptops.

The company also unveiled a new corporate identity with a redesigned logo and geometric motif, as well as its new Intel Evo branding for the Project Athena initiative that aims to deliver a high level of quality control when it comes to experiences across productivity, gaming, and entertainment.

Described as the “world’s best processor for thin and light laptops”, the 11th Gen Core family will be available in more than 50 different laptops from Dell, Acer, Lenovo, HP, Samsung, Asus, and others that are expected to go on sale in many parts of the world this holiday season, and over 150 models in total. Intel Executive Vice President and GM, Client Computing Group, Gregory Bryant, said during a virtual launch event that Tiger Lake “is the best processor intel has ever built, the best processor on the market, and it certainly rises above all the imitators”.

There are two classes of new CPUs, UP3 (formerly the U-series) running at 15W and UP4 (formerly the Y-series) running at 7W, although Intel now uses a naming scheme that does not emphasise this difference. Laptop OEMs may also configure the TDP wattages as per the requirements of individual designs. The former can now run between 12W and 28W, while the latter can scale from 7W to 15W.

Starting at the top end, the Core i7-1185G7 has four cores with Hyper-Threading and runs at a base frequency of 3GHz with all-core and single-core boost speeds of up to 4.3GHz and 4.8GHz respectively. This model features Intel Iris Xe graphics with 96 execution units. In total, there are three Core i7, two Core i5, and four Core i3 models across the two TDP groups. The Core i3 models use Intel’s older UHD graphics hardware and have only two cores with Hyper-Threading.

The 11th Gen Core ‘Tiger Lake‘ family promises 2.7X faster performance than the competition in specific creator usages, such as upscaling photos, which use Intel’s DL Boost extensions and integrated AI processing hardware. Built-in AI can also be used to improve collaboration, for example applying background blur and noise removal in video conferencing software at lower power than before.

Intel claims the new integrated Iris Xe GPU will make Tiger Lake based laptops better than 90 percent of thin and light models with discrete graphics sold last year, and that users can expect up to 2X higher frame rates in demanding games at 1080p. Based on the Xe-LP architecture, this could give Intel a significant boost in an area where it has so far lagged behind competitor AMD. Intel says laptop OEMs will be able to offer reasonable gaming quality in compact laptops that aren’t designed to accommodate discrete GPUs.

On the platform level, Tiger Lake introduces support for Wi-Fi 6, USB 4 and Thunderbolt 4, as well as the internal PCIe 4.0 interconnect, and a new generation of DDR5 RAM. Direct connections to PCIe 4.0 SSDs will improve data transfer rates, and Thunderbolt 4 will allow for four 4K HDR displays to run simultaneously. Dolby Vision and the AV1 codec improve media performance, while total memory encryption should improve resilience to hardware-based security attacks.

This family of 11th Gen Core CPUs is manufactured on Intel’s 10nm ‘SuperFin’ process, which leverages improved transistor gates to reduce power leakage and increase performance at lower voltages. This improves power efficiency as well as the range of frequencies that Tiger Lake CPUs can achieve in compact laptops.

Intel struggled for several years to ship its first 10nm processors, the ill-fated Cannonlake generation, although it did manage to ship the subsequent Ice Lake generation in enough quantity in 2019 to serve some segments of the laptop market. Intel recently announced that its next step, down to 7nm, has also been delayed for at least a year, so the improvements delivered by the 10nm SuperFin process are much needed.