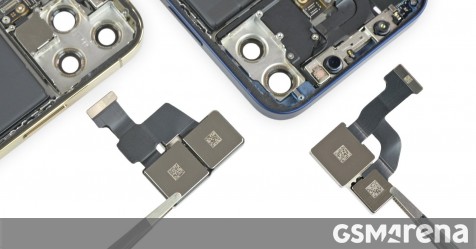 iPhone 12 cameras can only be replaced by official Apple technicians, 12 Pro is unaffected


Back when Apple added a fingerprint reader to the iPhone 5s, it made it impossible to replace by anyone other than an authorized technician. That makes some sense – a bogus reader may circumvent security. But over the years more and more components have become difficult to replace.

During its teardown and testing of the iPhone 12, iFixit found that taking the camera out and replacing it with an identical module from another phone causes issues. And not just the error report you get when you swap screens (“Unable to verify that this iPhone has a genuine Apple display”).

No, this looks more like a bug. The camera works, but develops constant issues – it hangs occasionally, some camera modes stop working and the ultrawide camera refuses to turn on in photo mode. Strangely, it works just fine for videos.

Even more strange is that doing the same procedure with an iPhone 12 Pro goes without a hitch – the new module works just fine, wide, ultrawide, tele camera, all of them, all camera modes too.

iFixit explains that Apple has changed its training manuals. Starting with the iPhone 12 series, changing the display and camera requires the use of the System Configuration tool, which will connect to Apple’s servers before reprogramming the new component to work properly.

Previously (starting with the XR/XS generation), this was only required when changing batteries. Changing security components – Touch ID or Face ID (which is embedded into the display and can’t be changed separately) – is a whole different can of beans and requires reprogramming the Security Enclave.

Hugh Jeffreys, who runs one of the largest tech repair channels on YouTube, encountered the same issues as you can see in the video below. The bit about the camera starts at 8:50, but you can watch the whole video, which is an in-depth assessment of the iPhone 12 repairability (or lack thereof).