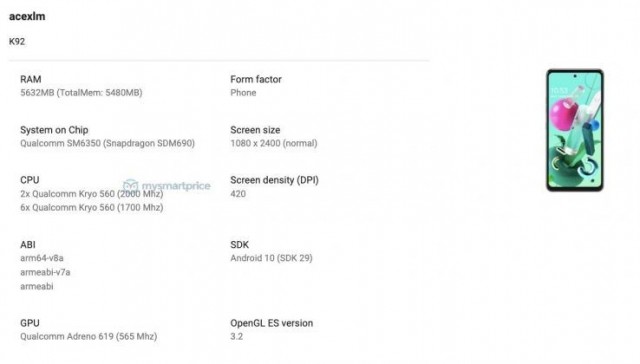 
A solid midranger by LG is on its way, as evidenced by a Google Play Console listing. Carrying the codename “acexlm” and the K92 moniker it sports a Snapdragon 690 chipset and 6GB RAM, as well as a 1080p+ screen.

Qualcomm initially introduced the Snapdragon 690 chipset coupled with an X51 modem. Its goal is “to make 5G more affordable for consumers worldwide”, as Cristiano Amon, President at Qualcomm, said back in June. The LG K92 also sports a punch hole centered at the top.

South Korea, the home of LG, is one of the biggest 5G markets in the world and it is not a surprise that the company wants to expand its 5G portfolio. The K92 is probably going to appear at home but it could also be headed to the United States, according to a leak from 10 days ago. It might have a 64MP camera and a side-mounted fingerprint scanner and is likely to be sold by Cricket Wireless.