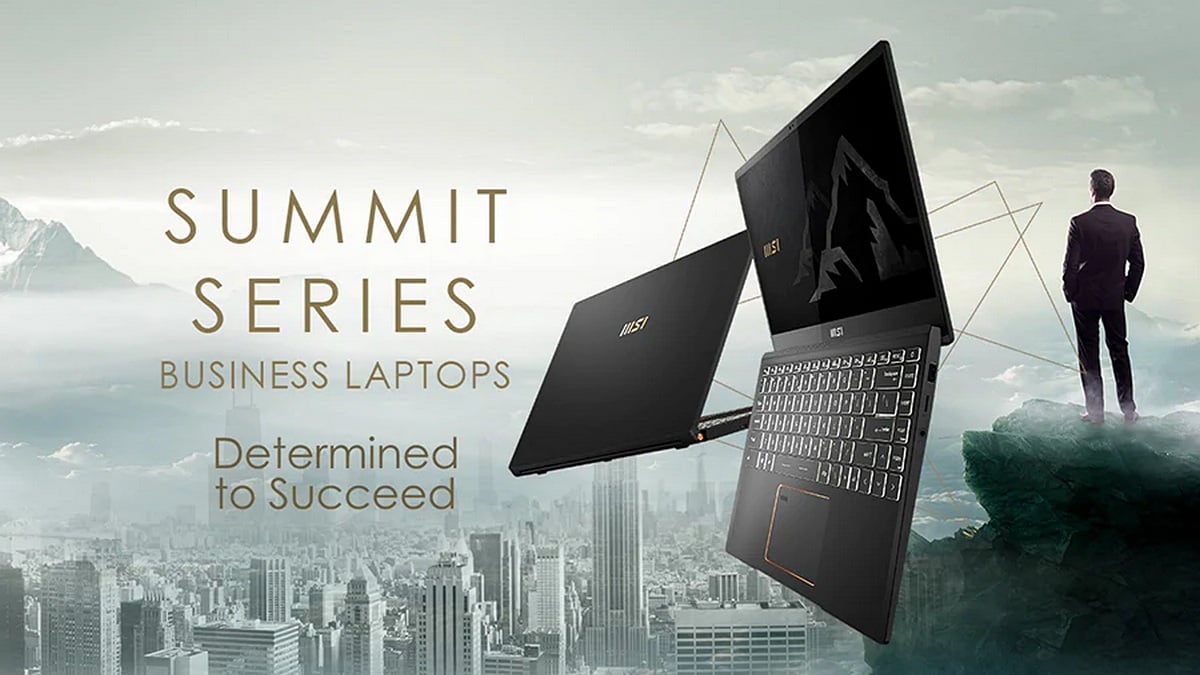 
MSI Summit E15, Summit E14, Summit B15, and Summit B14 laptops have been announced by the company for the business laptop market. All four laptop models are powered by the latest 11th generation Tiger Lake CPUs from Intel. The Summit series is part of MSI’s “Business and Productivity” lineup that comes with a new, minimalist logo. MSI Summit E15 and Summit E14 come with dedicated Nvidia graphics while the Summit B15 and Summit B14 have Intel Iris Xe graphics.

MSI has not shared pricing for the Summit series laptop models, but has said that its “Business and Productivity” laptops are expected to go on sale starting next month through popular technology retailers and online stores. As of now, the company has not shared information on international availability.

The MSI Summit E15 features up to a 15.6-inch 4K UHD display with 100 percent Adobe RGB coverage and thin bezels. It is powered by an 11th Gen Intel Core i7 processor and an Nvidia GeForce GTX 1650 Ti Max-Q design graphics card with 4GB GDDR6 VRAM. It comes with up to 64GB of RAM clocked at 3,200MHz, one NVMe M.2 PCIe Gen4 SSD and M.2 NVMe PCIe Gen3 SSD slots.

The MSI Summit E14 carries mostly the same specifications as the MSI Summit E15 with a few differences. It features up to a 14-inch 4K UHD display, up to 32GB of LPDDR4x RAM, and a single NVMe M.2 PCIe Gen4 SSD for storage. The connectivity options are the same as well with the only difference being an additional USB 2.0 Type-A port instead of the HDMI port. The MSI Summit E14 measures 319x219x15.9mm with a starting weight of 1.29kg.

The MSI Summit B15 comes with a 15.6-inch full-HD IPS-level thin bezel display and is powered by the same 11th Gen Intel Core i7 processor, however, there are no dedicated graphics on the Summit B series, instead it features Intel Iris Xe graphics.

You get up to 64GB of RAM clocked at 3,200MHz and the same storage options as the MSI Summit E15. The keyboard, fingerprint scanner, and connectivity options are mostly the same as well, with the only difference being a single Thunderbolt 4 port instead of two, and an additional USB 3.1 Gen1 Type-A port. The MSI Summit B15 measures 356.8×233.7×16.9mm and weighs 1.6kg.

Previous ArticleDell XPS 13, Dell XPS 13 2-in-1 to Be Upgraded With Intel’s 11th-Generation Tiger Lake CPUs: Report
Next ArticleIFA Tech Trade Fair Is Back, but 240,000 Visitors Aren’t