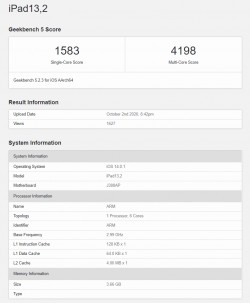 New iPad shows up on GeekBench, A14 chip has some powerful cores


Apple announced the iPad Air (2020) on September 15, but the tablet is yet to go on sale. What’s probably a pre-production unit has made it to GeekBench, showing us the performance of the new A14 Bionic chipset, also to be featured in the upcoming iPhone.

Meanwhile, in the multi-core test, the A14-equipped device has posted a 4198 score which is about 20% higher than the iPhone 11 Pro’s results. That’s the ballpark of the next Exynos multi-core figure (4250pts) and slightly higher than the Snapdragon for 2021 (4090pts) – provided, once again, that the rumored numbers are correct.

The iPad Air for 2019 was powered by the same chipset as then-current iPhone XS and benchmark scores ran very similar between the two. We expect that will be the case with the iPhone 12 this year too.