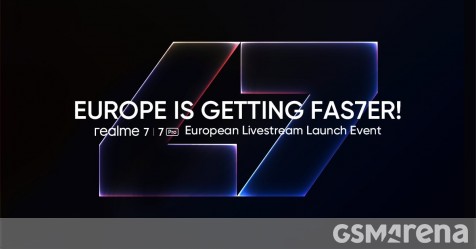 
At the start of the month, Realme unveiled its 7 series phones in India. Now, we have confirmation that both phones will make their way to Europe next Wednesday. The launch keynote is scheduled for 10:30AM CEST (8:30AM UTC) on October 7.

Europe, get ready for #FAS7ER charging and performance! Tune in at 10:30AM CEST on October 7th for the #realme7series European livestream launch.

RT if you’re reading this from Europe! pic.twitter.com/XUMc6Jx6xD

The key difference is that the European version of the Realme 7 will come with a downgraded 48MP primary sensor instead of the 64MP one found on the Indian Realme 7. The rest of the specs should remain unchanged as per the latest rumors and the 7 Pro will have no alterations.

We’re also expecting Realme’s 125W UltraDart charger though it remains to be seen what phone it will debut with.

Previous ArticleXiaomi brings the Mi Watch to Europe, a 65W GaN charger tags along
Next ArticleMoto Razr 5G can survive 100 flips a day for 5 years, its tech is covered by 100+ patents