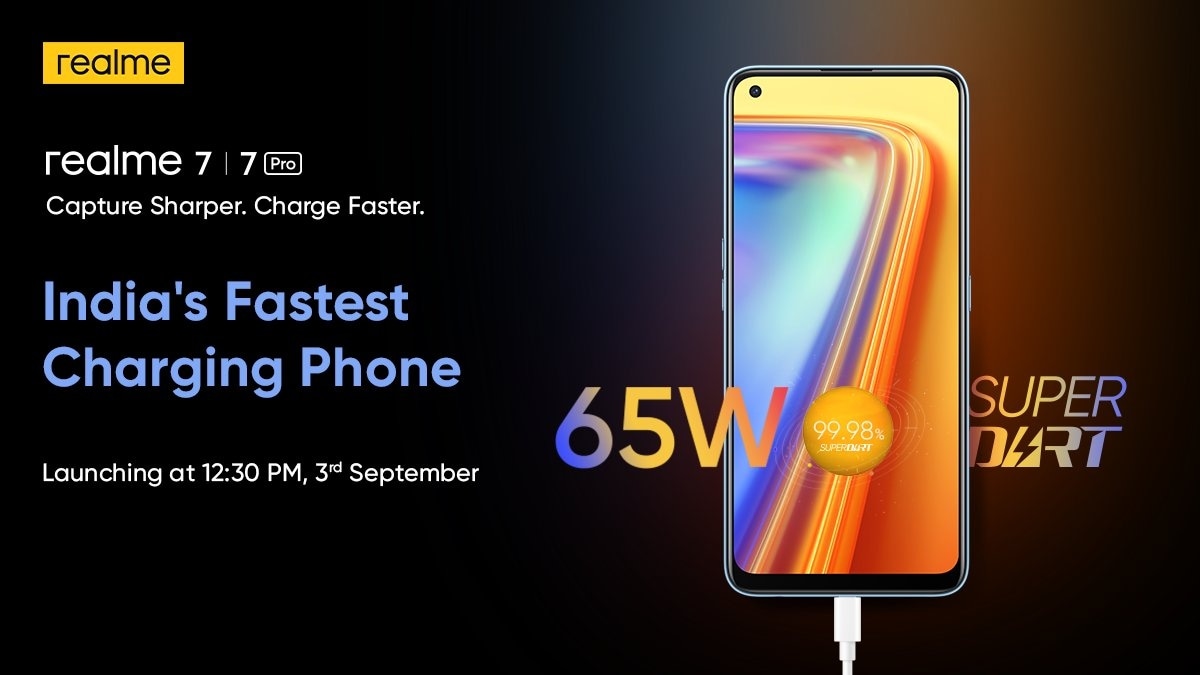 Realme 7 Series Set to Launch in India on September 3

As per the official invite, Realme 7 and Realme 7 Pro India launch will take place at 12:30pm on September 3. The company will host a digital launch event on its social media channels to announce the debut of the new models.

In addition to the invite sent to the media, the Realme Twitter account posted an image that shows off the presence of 65W SuperDart fast charging technology on the Realme 7 and Realme 7 Pro. The phones are also likely to feature a hole-punch display design.

Separately, an 11-second video clip has also been posted on Twitter by Realme that hints at a faster experience than the existing Realme 6 models.

Aside from the teaser posted by the Realme Twitter account, Flipkart has created a microsite suggesting the India availability of the Realme 7 and Realme 7 Pro through the online marketplace. The microsite also shows that the phones have passed the TUV Rheinland Smartphone Reliability Verification. Further, it highlights that the Realme 7 series is capable of delivering up to 3.5 hours of voice calling or 13.2 hours of music playback in just three minutes of charge.

Realme India CEO Madhav Sheth has also taken to the microblogging site to give some details about the Realme 7 series ahead of its formal debut.

Although Sheth already suggested the India launch last week, he has now changed his name by adding Faster7 next to his first name to create some hype. He has also stated on Twitter that he would speak about the Realme 7 series during his AskMadhav virtual session in a few days.

Sheth earlier this week conducted a poll on Twitter to understand whether his followers want an in-display fingerprint sensor or a side-mounted sensor. That poll received a mandate for the former option.

Apart from the indication of the in-display fingerprint sensor, details about the Realme 7 series are bleak at this moment. The rumour mill also doesn’t have much to help us help us understand what all would be there on the new models.

Having said that, the Realme 7 series is set to debut as the successors to the Realme 6 series, which comprises the Realme 6 and Realme 6 Pro that both were launched in India in March. The new models are also speculated to be different from the Realme X7 and Realme X7 Pro that are launching in China on September 1.